About a month ago I got an e-mail from my internet buddy about a meal he had at Logans. Since our taste seem similar I want to give a try. However about that time my vehicle went south. It was in the shop for a month. Without that vehicle I have no wheelchair, without a wheelchair I do not go into Logans because the peanut shells would be a hazard on my crutches. I got the vehicle back and went in. I had my usual cup of chili which would not cooperate for its photo. My buddy talked about a grilled chicken breast with peppercorn sauce over pilaf. However the only thing I could find on the menu that was like that was BBQ Ribs & Chicken. Half portion of BBQ Ribs with a mesquite wood-grilled chicken breast smothered with Parmesan Peppercorn dressing. So I got that with grilled vegetable skewer on the side. The ribs were decent falling off the bone with evident smoke and a sweet sauce. The breast was also tender and succulent with a smoky flavor complemented by the creamy spicy sauce. The rice pilaf was nice and I generally do not care for restaurant rice. The vegetables also had a nice smoky flavor and except for the zucchini (uncooked for my taste) sort melted in your mouth 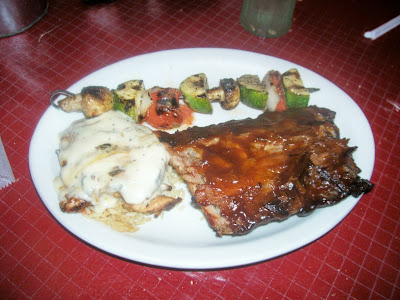 Cinnamon Roll Sundae. A warm, made-in-our roadhouse cinnamon roll made with our yeast roll dough, cinnamon sugar and chopped walnuts, then freshly baked. Topped with warm apples, vanilla ice cream and drizzled with caramel sauce. This sounded great and the warm apple, ice cream and caramel were great. The roll was like a cement block. 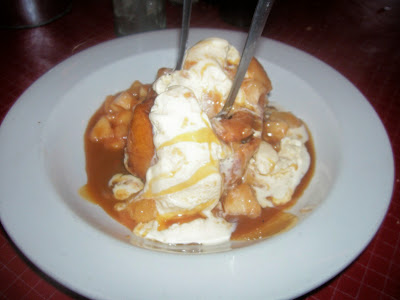