While she is not offering everything she start offering more than tamales during the week. These days tamales, enchiladas, and tacos can be gotten as an each or a meal. Also beef or pork fajitas her style along with some pastor item. Pastor is a specially seasoned pork that originated from Mexico City where she is from. Below is a four pack of the tacos pastor. The pork marinated in dried peppers, spices and pineapple juice. The taco is the meat, pineapple chunks, onions, cilantro and a squeeze of lime if you like. You can also add salsa roja too. Since this lady hails from Mexico City I am assuming this is the real deal 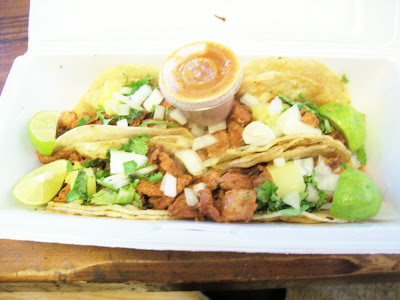 She also does something with the pastor meat called a gringa. We would recognize it as a quesadilla. Two flour tortilla with cheese and pastor meat heated on a griddle until ooey gooey. 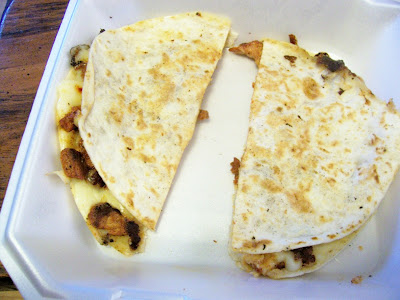 For a little taste of Mexico come on down. She is on Common St behind the university next to Balls.